I have 2 questions, first regarding grounding of DC Power Supplies, and second regarding making copper bus bars.

Second question, is there any codes that would prevent the fabrication and use of a copper bus bar to be used on a 12VDC-200A circuit, if that bus bar is inside an enclosed panel? Does this bus bar need to to be certified to any degree for NEC 70. I am planning on using a 1/4 x 1.5 inch copper bar (McMasterCarr 2557T64), bolted to several posts (McMasterCarr 9365T5), as this provides space savings in the panel.

Cody Brown said:
I have 2 questions, first regarding grounding of DC Power Supplies, and second regarding making copper bus bars.

Second question, is there any codes that would prevent the fabrication and use of a copper bus bar to be used on a 12VDC-200A circuit, if that bus bar is inside an enclosed panel? Does this bus bar need to to be certified to any degree for NEC 70. I am planning on using a 1/4 x 1.5 inch copper bar (McMasterCarr 2557T64), bolted to several posts (McMasterCarr 9365T5), as this provides space savings in the panel.
Click to expand...

Without knowing the application, it's hard to say definitively, but I would almost certainly not ground the negative side of the power supply. Mean Well went to a great deal of effort to isolate output from input; why do you feel it necessary to ground the DC side? From a practical side, you'll vaporize a 12ga bonding jumper if there's ever a short circuit.

Copper bus bar is fine, and done all the time. Does this thing need to carry a UL listing for a control panel or something else?

I think you're mixing concepts. The EGC / GEC are defined as "ground" or "grounded" because of they are derived, and they exist for very specific purposes.

For your DC power supply, there is no reason to believe, without looking at the schematic for the power supply, that the negative ("0 volts") terminal has the voltage as the GEC. It's almost certainly guaranteed not to have the same voltage as the EGC. If you'd like to prove this to yourself, plug a large load into a receptacle, then measure the voltage difference between the EGC and GEC on another receptacle on the same circuit. The answer will most likely not be 0.000 volts.

The next issue is whether or not current would even flow in the event of some kind of fault. As SceneryDriver mentioned, this is an isolated power supply. What that means is there is no electrical connection between either of the input terminals and either of the output terminals. If you measured between the EGC and either the positive or negative terminal, there's no reason to believe you'd see any specific voltage. If you put 2 9-volt batteries on a table, and they aren't connected, you wouldn't read a voltage between either of them. You definitely won't read anything like 9 or any other number of volts.
P

Whether this is appropriate in your case is hard to tell because of a lack of information, but 12 volts at 200 amps is not a typical control power system.

Keep in mind the way a car works. The frame of the car is the common or return to the battery.

I think somebody mentioned the issue of whether or not your system needs to be UL listed or not.

I think if you poke around and look for commercially available bus bars you will find that after you consider the labor involved to fabricate the bars especially if you have a lot of tap points, it probably isn't going to save you any money over just buying something off the shelf. And there are plenty of bus bar systems out there.

If you are going to do this, I would suggest that you attach the power supply leads to the middle of the bus bar lengthwise rather than on one end or the other.

Lugs direct 36s4-3 would be my choice over a bus bar. UL listed and has a crap load of connectors built in. I have used hundreds of them. They have kits of insulators to mount them on, and lugs to connect bigger wires if #4 is not enough. I think they are also listed for flexible wire, but you'd have to check that for yourself just to make sure that your particular size would work. 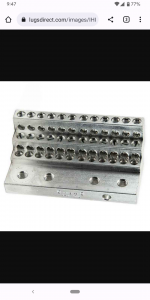 petersonra said:
Most of the time in industrial control panels the negative side of DC control power supplies is grounded, just as they are with AC control power transformers.
Click to expand...

I think "some of the time" might be more appropriate. I see grounded DC negative(s) on large machines, ostensibly to ease troubleshooting - you can grab "ground" by sticking your meter lead to any piece of the machine frame.

While handy (maybe), connecting the negative side of the power supply - which the manufacturer has gone to great lengths to isolate - usually causes more problems than it helps to solve. I've had nasty noise issues with analog inputs, as well as other equipment not liking the common mode noise generated by VFDs. Lifting the negative DC rail off ground solved that almost every time. I tend to design machines to keep DC isolated from earth ground if at all possible.

'To tie DC- to Earth, or not' is a quasi-religious debate that will probably never be settled. I do agree though - 200A at 12VDC is not a normal control system.

I do like those LugsDirect bus bars. Those are slick, though not touchsafe.

The largest DC system I worked on had a calculated available fault current of 140kA. The bus bars were giant chunks of copper. They were just copper bars someone threaded and then connected to a bunch of 4/0 cables.