Has anyone seen this type of switch before?

Beat me too it

tthh said:
Beat me too it
Click to expand...

But apparently by less than one minute!

synchro said:
Here's a picture of the instruction sheet for Leviton surface mount devices from an Ebay listing for such a switch at the link below:

Dennis Alwon said:
That doesn't show the interior of the bakelite enclosure. Also these switches look like they have a special box for mounting. I also doubt that the neutral will be allowed to connect to the yoke. I suppose that would be the ground and neutrals just spliced in the box. Defeats the purpose of these
Click to expand...

The devices are self contained. They don't have a special box, they are mounted in their own integrated enclosure.
S

Saw these on Amazon:

Jraef said:
MWBCs were quite common in the knob-and-tube days. This was done with some early NM cable, but likely within the time frame where K&T was still prominent.
Click to expand...

This is true, but in the picture of these three switches, all the hots connect together, so just one circuit, so not a MWBC!

I see it now. They are 3-way switches with a bypass bar for 1p use.

They appear to have been designed for adding to cable runs without slack.

The "switch beyond load" wiring diagrams appear to be a switched neutral?

Dennis Alwon said:
This is the strangest switch I have ever seen. It appears the neutrals are connected thru the yoke and the hot wire passes thru to the bar at the bottom right and presumably is switched to the switch leg on the bottom left.
Anyone seen this before.

Not that I can recall, but it sure looks like a horrible design with a lot of potential for getting zapped.

LarryFine said:
They are 3-way switches with a bypass bar for 1p use.
Click to expand...

I thought that too, but then why the on / off indication
F

Another C10 said:
I thought that too, but then why the on / off indication
Click to expand...

Because this model was sold as 1p (one pole) or SPST, so ON and OFF are on the handle.

The Bakelite of the switch can have up to four screws, one at each corner for the various models made (SPST, 3-Way and 4-Way).

The old porcelain switches were the same way. One molded porcelain case with three versions sold. Or six, if you count push buttons and toggle versions. Yes, I worked on a LOT of old homes in Richmond, just like Larry is doing too. 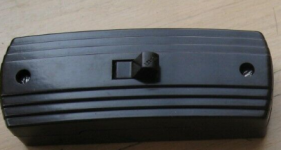 I would imagine these were designed narrow so that, when butted together like in the original photo, a multigang wall plate fits fine and you really have no idea it is a surface mount box.

Dennis Alwon said:
The switch is designed for this type enclosure however the pic I posted seems to be an recessed box

They are a complete assembly, there is no "yoke" as you have mentioned before, the switch is not replaceable if it goes bad you need to replace the entire assembly. They are intended for surface mounting, Your OP was not a multi gang flush assembly it was multiple individual units mounted next to one another and someone tried to make them semi flush. There is no trim plate to cover edges of the finished wall if you tried to recess them like there is for regular switches in a box.

hornetd said:
In the absence of individual copper washers between each conductor there is a word for how the white wires are terminated. Let me think. Oh I remember now. That word is BOGUS!
Click to expand...

By "feed through" I mean you can run power in say the top with one cable and out the bottom with another cable. A third cable likely means needing to double up conductors on at least some terminals - that is not acceptable with that type of terminal though it was done a lot.

The one switch that been individualized here has a center bus that would typically would pass the grounded conductor trough from top to bottom or bottom to top, the right side bus would pass through the ungrounded conductor, unswitched, and the one terminal on left side is switched output with other end of switch being the right side bus. In that setup one could bring two wire cable in and have three wire cable out that contains switched and unswitched leads and never double up any conductors on same terminal screw.

The OP image does have doubled up conductors on some terminals - that would be and should always been a NEC violation unless the device was rated for it - but like you said probably was not rated unless it would have provided some washers between each conductor or something of that nature.
You must log in or register to reply here.
Share:
Facebook Twitter Reddit Pinterest Tumblr WhatsApp Email Share Link
Top