I'm looking to specify a surge suppressor to support extending an indoor 25-volt PA system to outdoor speakers, and I reached a point of confusion that I think will increase my understanding (and hopefully that of others) of the relevant bonding and code issues.

I have found a surge suppressor that is suitable for the type of speaker system we have (constant voltage), but it lists only the 70.7 and 100 volt variants of this type of system. I called the vendor, and asked if it also supported 25-volt systems, and the tech on the phone was knowledgeable enough on the topic that he pointed me to their 8-ohm surge protector.

So my questions are:

The 4/8 ohm surge suppressor that the tech suggested is rated for 100 watts which would be 28.3 Vrms with a 8 ohm load. Therefore the 8 ohm version should provide better protection than the 70.7/100 volt version on a 25 volt system, and the 25 volt audio will not be distorted by the varistors inside of the surge protector because it supports 28.3 Vrms.

synchro said:
The 4/8 ohm surge suppressor that the tech suggested is rated for 100 watts which would be 28.3 Vrms with a 8 ohm load. Therefore the 8 ohm version should provide better protection than the 70.7/100 volt version on a 25 volt system, and the 25 volt audio will not be distorted by the varistors inside of the surge protector because it supports 28.3 Vrms.
Click to expand...

I concur, and thanks for saving me from so much typing.

PetesGuide said:
Surely this is a common type of installation, but I don't see any lightning arrestors that list support for 25-volt PA systems--what am I missing?
Click to expand...

25 volt systems really aren't used much anymore. You'll see them for vintage school systems or jurisdictions that still require anything over 50 volts to be in conduit. Most 70 volt systems are class 2 today.

PetesGuide said:
What elements of the design might make this suitable only for the higher-voltage 70.7 and 100 volt systems, and not the 25-volt systems?
Click to expand...

Since a 70 volt system can reach better than 70 volts you would obviously design a protector to clamp HIGHER than 70 volts but lower than what would be damaging to the speakers and particularly the amp. You want a comfortable margin above 70 volts. In the case of the AL-D2-PAW that would be 180 volts. That said, I see no reason to believe that the 180 volt limit would not protect the outputs of a 25 volt amp just as well. So I think that's a non issue.

As for the AL-D2-AW (the "8 ohm" version mentioned) the clamping is 82 volts. Same design. That is an option and could provide better protection as long as the system will never be upgraded to 70 volts.

The only thing I don't like about either version is the internal fuses. Those are what limits the device to 100W and could be a PITA maintenance issue if these SPDs aren't readily accessable.

You might want to consider products from Ditek. They give you a choice of clamping voltages all in a replaceable plug-in module which makes maintenance easy for when it self destructs. Just stock some spares. The DTK-2MHLP24B is for 24 volts and clamps at 39 volts which is better than the AL-D2-AW's 82volts.

The only thing you will have to provide is a outdoor housing if that's where these are going.

synchro said:
... and the 25 volt audio will not be distorted by the varistors inside of the surge protector because it supports 28.3 Vrms.
Click to expand...

Not seeing how you get that at all. So does the 70 volt version.

synchro said:
... and the 25 volt audio will not be distorted by the varistors inside of the surge protector because it supports 28.3 Vrms.
Click to expand...

hbiss said:
Not seeing how you get that at all. So does the 70 volt version.

This is what I was attempting to convey: Even though the varistor voltage in the 4/8 ohm version is reduced to 82V from the 180V of the 70V/100V version, presumably it will support a 28.3 VRMS sinewave without significant distortion because that's the RMS voltage across 8 ohms at its 100 watt rating. Therefore, it should support the lower signal level of 25VRMS without distortion.
I believe the 82V and 180V spec for the varistors in the surge suppressors refers to the nominal applied DC voltage to draw 1 milliamp , which is VN(DC) on the following graph showing a generic current vs. applied voltage for a varistor. We want the peak voltage of the signal to be below VPM so that the resistance of the varistor is relatively high and stays at a constant value (i.e., the same I vs. V slope) as the signal's voltage waveform varies around. Otherwise the audio signal will be distorted. 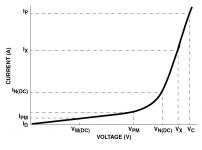 ...
Here is a spec sheet for some varistors, including ones with nominal 82V and 180V values at an applied 1 milliamp:
... 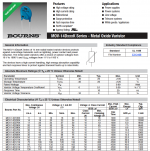 All the more reason to base the selection on the maximum over voltage your amp can reasonably expect to survive rather than trying to limit so close to the working voltage that it causes other problems. MOVs aren't linear devices unfortunately. There is no sudden "knee" below which there is no conduction then a few millivolts more it's full on. Using them for audio like this can present problems and that is from trying to be too "protective". As long as you clamp below a couple of hundred volts you should be OK.


But keep in mind that no protection is absolute. I have considerable experience with similar protectors on telcom POTS circuits. I have seen them literally blown across the room from a nearby lightning strike yet the equipment connected after it survived. Other times the fuses were blown and the protector had to be replaced. Other times the equipment was damaged and the protector survived. It's always a crap shoot.

OK, all these answers are very helpful!

Where in NEC 2017 do I look to see if 70-volt systems need to be in a conduit? California Electrical Code 2019 applies to our jurisdiction, but I want to start with the NEC wording and then see how California has modified it, to increase my understanding of the issue.